US stocks started the cash session firmer this afternoon after some mixed earnings results. The S&P rallied to post a new intra-day high, only to retreat as the session progressed. It has become apparent that Prime Minister Boris Johnson will not be able to “deliver Brexit come what may” as he promised by the 31st of October.  The likely outcome of this farce called Brexit is an extension and a possible general election if all the parties agree.

Asian markets traded mixed on the day as the ASX and the Nikkei managed to chalk up small gains, the indices were up 0.07% and 0.47% respectively. The Hang Seng and the CSI 300 eased after a positive start to the week, the indices closed the session down 0.39% and 0.42% respectively.

Multichoice group concluded their Phutuma Nathi (PN) swap deal with PN shareholders exchanging 1 PN share for 0.97 Multichoice [JSE:MCG]  shares.  The swap deal has been met with mixed sentiment from shareholders as some PN shareholders were uncomfortable about giving up their shares for Multichoice shares as the PN BEE shares paid a higher dividend yield than the MCG shares. The stock closed the day flat to trade at 12341c per share.

Stadio holdings [JSE:SDO], the private education group was the largest losser on the day  retreating 6.36%,  the education group was closely followed by Hospitality Property Fund which eased 6.25% on the day. Other significant losses were sustained by Nampak Ltd [JSE:NPK],  Ascendis Health Ltd [JSE:ASC] and Sappi which shed 5.19, 5.13% and 4.11% respectively. Most mining stocks remained flat today as commodity prices remained depressed and the Rand depreciated against the US dollar. 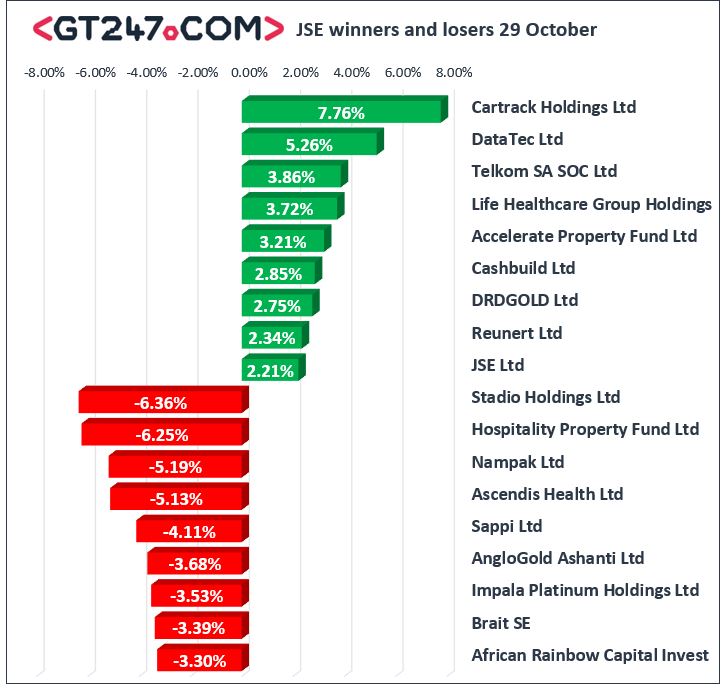 The JSE All-Share index closed 0.1% weaker whilst the JSE Top-40 index eased 0.08%. The Financial index retreated 0.13% to close the day at 16160.  The Industrial and Resource indices failed to shrug off the losses as the industrials eased 0.05% whilst the resources were marginally weaker easing 0.01%.

The Rand was weaker today finding resistance at R14.53 to the dollar before it pulled back to session lows of R14.72.  The Rand was also weaker against the crosses and was trading at R16.26 to the Euro and R18.85 to the British Pound. All eyes will be on Finance Minister Mboweni tomorrow when he announces MTBPS in parliament tomorrow.

Brent crude remained weak on the day to trade at $60.70 per barrel at the time of writing.  The commodity continued to slip on Tuesday as concerns around OPEC members adhering to their output cuts for November and December increased sending the commodity lower.  The market anticipates US crude inventory levels could increase as output increases and demand wanes.  Gold was on the backfoot again on Tuesday to trade at $1487, down $7 from Monday’s levels.