We saw Aspen Pharmacare Holdings Ltd [JSE:APN] wobble on rumours of a Viceroy research report causing the company to issue a SENS announcement stating that it has had no contact with Viceroy Research, closing at R247.54, down by 4.56%. Meanwhile Steinhoff’s woes continued as investors looked to offload shares after yesterday’s announcement by the ECB, the share closed at R7.55, down by another 13.02%.

The rand was trading at R12.40 to the dollar ahead of tomorrow’s parliamentary sub-committee meeting to deliberate on a draft procedure for implementing section 89 (1) of the constitution, which concerns the removal of a president. 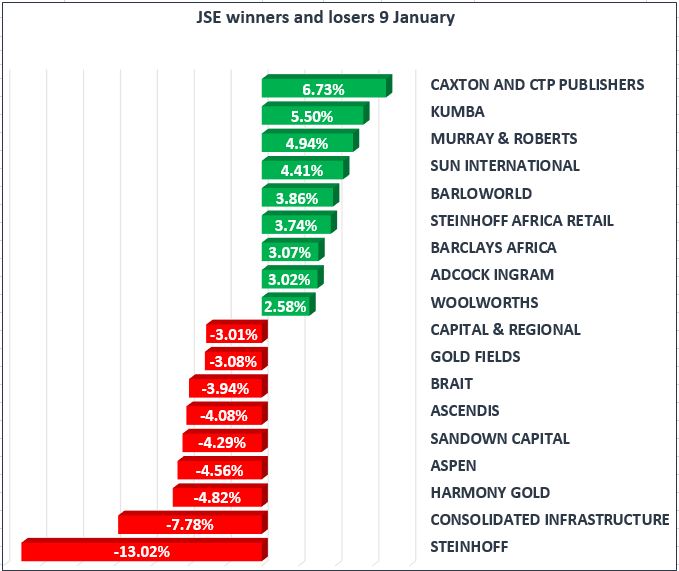 Gold prices retreated further to $1309.39/ounce as demand for the dollar has increased as investors continue to bet on further interest rate hikes by the Fed this year. This has pushed the U.S. dollar index up 0.22% to 92.56. Gold is highly sensitive to rising U.S. interest rates, as they increase the opportunity cost of holding a non-yielding asset.

Oil has increased every month since July, benefiting from production cut efforts led by OPEC. Brent Crude is currently trading at $68.10/bbl.

Asian shares rose for a sixth straight day with China’s Shanghai Composite up by 0.16% and Japan’s Nikkei up 0.57%.

More good news for European shares as the unemployment rate fell to 8.7% in November according to data from Eurostat while Germany’s industrial production rose by 3.4% from the previous month, far exceeding forecasts.

The pound weakened as Theresa May’s cabinet reshuffle descended into chaos with senior government members refusing to change roles, the end result was a less dramatic shake-up than planned.

U.S. equities had a record open as the market optimism continues ahead of the earnings season with Financial giants BlackRock, J.P. Morgan Chase and Wells Fargo among the companies set to report results later this week.

JPMorgan’s CEO, Jamie Dimon has backtracked from his earlier comments on bitcoin and cryptocurrencies, saying that he believes n the technology behind it during an interview with Fox Business. Bitcoin prices were at …. $15,000 at the time of writing.