The JSE advanced to close firmer on Wednesday after a lukewarm start to the session.

The local bourse seemed to shrug off the worse than expected South African GDP data which was released on Tuesday as it soldiered higher with other global markets. World indices rose on the back of speculation that the USA and China will reach a trade deal following reports over the past couple of sessions to the contrary. This trend of the markets reacting to trade headlines seems likely to persist well into the new year as both parties try to come to an agreement.

There was further disappointment in terms of local economic data as the Standard Bank PMI reading for November fell to 48.6 from a prior recording of 49.4, which was also worse than the forecasted 49.1. The rand took direction from a weakening US dollar which saw it advance to a session high of R14.53 before it was recorded trading 0.32% firmer at R14.58/$ at 17.00 CAT. 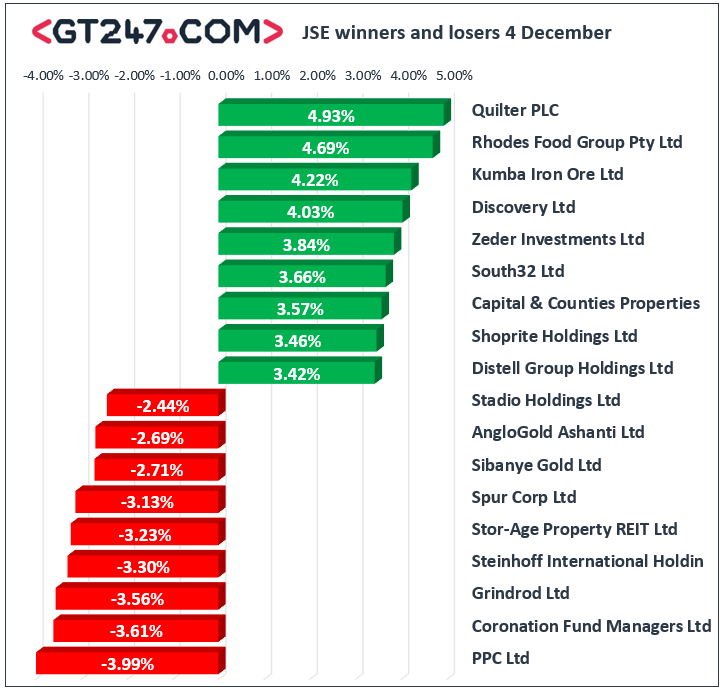 The JSE All-Share index eventually closed 0.82% firmer while the JSE Top-40 index gained 1.06%. All the major indices advanced on the day with the Financials index taking the bulk of the gains as it rose 1.16%. The Industrials and Resources indices gained 0.9% and 0.75% respectively.

Brent crude was bolstered by the positive news on the trade war which saw the rise on the day before it was recorded trading 3.5% firmer at $62.95/barrel just after the JSE close.