Forex Friday – Brexit, we have a Deal!

This comes after years of discussions which came to a climax this week as policymakers managed to clinch a deal that suits both parties.

But yes, there is a, "But" Prime Minister Boris Johnson is left to persuade his Parliament to get the deal approved.

The showdown between Prime Minister Johnson and Parliament will kick off this Saturday which is now abruptly called, "Super Saturday" This is the first time since 1982 that a sitting in Parliament will be held on a Saturday. The Conservatives have no majority, so we can expect a showdown of note as PM Johnson tries his utmost to convince the opposition.

The British pound (GBP) advanced as the news broke which saw Sterling hit a fresh 5-month high but quickly retraced as the dust settled and the news is absorbed.

Taking a closer look at the GBPUSD currency pair:

The British Pound (GBP) also gave up some of its gains from yesterday's rally with the U.S Dollar (USD) pretty much flat on Friday. If we see the deal accepted by the U.K parliament, then we might expect the GBPUSD currency pair move higher to the 1.3176 target level.

Taking a closer look at the FTSE 100:

The FTSE 100 has picked up slightly from yesterday as the price action is now firmly between the 7259 resistance and 7137 support level. The FTSE might only indicate movement after "Super Saturday" which if a positive outcome is reached might see the FTSE target 7046. 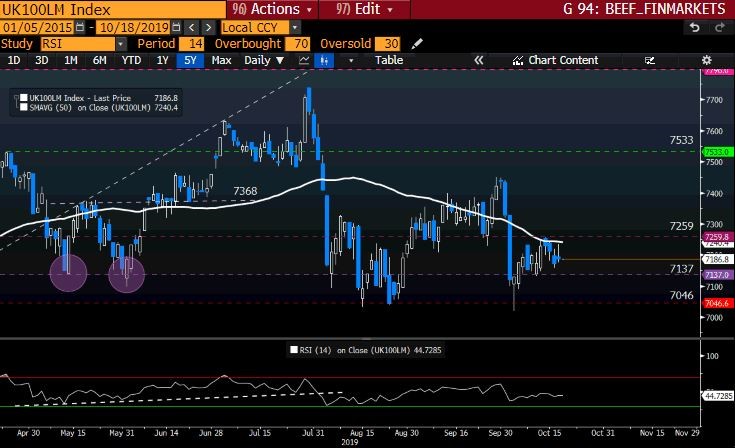