The JSE advanced on Wednesday mainly on the back of broad-based gains across most blue-chip stocks.

Gains were recorded despite the South African SACCI Business Confidence indicator for March falling to 91.8 from a prior recording of 93.4. Locally, index heavyweight Naspers also pushed the All-Share index higher as it was supported by the rise in Tencent Holdings which closed 1.36% firmer at $HK388.80 on the Hang Seng. 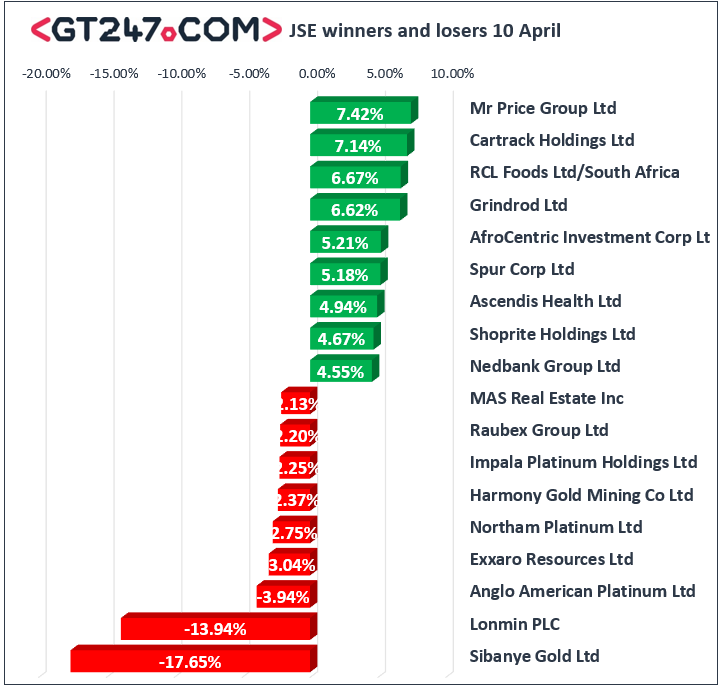 Sibanye Stillwater [JSE:SGL] slumped in today’s session primarily due to the dilutionary effect of the placement of new shares with institutional investors which was done on Tuesday. The stock fell 17.65% to close at R14.00. Platinum miners also traded mostly weaker on the day with losses being recorded Lonmin [JSE:LON] which lost 13.94% to close at R13.46, Impala Platinum [JSE:IMP] which dropped 2.25% to close at R63.53, as well as Anglo American Platinum [JSE:AMS] which fell 3.94% to close at R812.54. Coal miner Exxaro Resources [JSE:EXX] lost 3.04% as it closed at R172.86, while gold miner Harmony Gold [JSE:HAR] fell 2.37% to close at R27.64.

The JSE All-Share index eventually closed 0.99% higher while the JSE Top-40 index gained 1.16%. The Resources index struggled on the day as it lost 0.46%. The Industrials and Financials indices managed to gain 1.73% and 1.66% respectively.

Brent crude advanced despite a build being recorded in US inventories data which was released on Wednesday afternoon. Brent crude was trading 0.91% firmer at $71.23/barrel just after the JSE close.