Stocks tumbled worldwide on Monday after Donald Trump threatened to increase tariffs on Chinese imports to the USA over the weekend.

Investors scurried to safety as doubts were cast over the possibility of an amicable deal being reached in talks that were scheduled to begin this week. This nullified the impact of the improved US jobs data which was released on Friday. With Chinese trade data set to be released on Tuesday, there could be more downside if the numbers fail to beat initial estimates.

Earlier in Asian markets trading the Shanghai Composite Index slumped 5.84% while the Hang Seng lost 2.9%. The Nikkei only lost 0.22%. All the major indices in Europe were trading lower while US markets also opened significantly lower.

On the currency market, emerging market currencies retreated as the Chinese yuan came under pressure. The rand fell to a session low of R14.53/$ before it was recorded trading 1.12% weaker at R14.50/$ at 17.00 CAT. 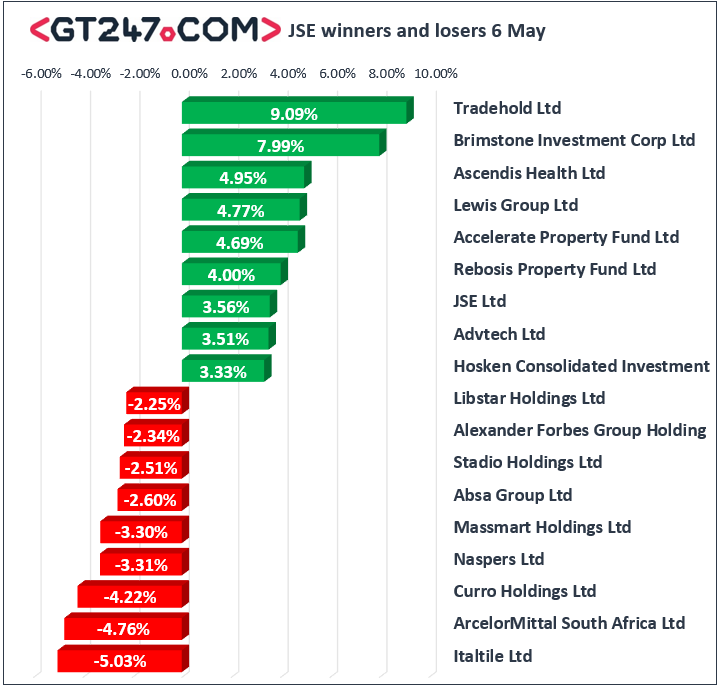 Gains were modest on the day with significant gains being recorded for Redefine Properties [JSE:RDF] which climbed 2.53% to close at R10.15, while Investec Property Fund [JSE:IPF] managed to gain 2.17% to close at R16.50. Ascendis Health [JSE:ASC] also recorded decent gains despite trading relatively low volumes as it closed 4.95% firmer at R5.30. Other significant gains on the day were recorded Exxaro Resources [JSE:EXX] which rose 1.53% to R167.01, Impala Platinum [JSE:IMP] which gained 1.55% to R60.19, as well as Truworths [JSE:TRU] which firmed to R79.01 after gaining 1.95%.

The JSE All-Share index eventually closed 1.05% lower while the blue-chip JSE Top-40 index lost 1.31%. All the major indices closed lower on the day with the Industrials index baring the biggest brunt as it lost 1.54%. The Resources and Financials indices lost 0.91% and 0.43% respectively.

Brent crude lost momentum due to the trade war jitters which saw it retreat to trade 0.27% weaker at $70.69/barrel just after the JSE close.