Financials lead the surge on the JSE

The rand was trading mostly firmer on the day as it peaked at a session high of R13.83/$. However, the local currency pulled back after the greenback advanced on the back of positive US retail sales data. At 17.00 CAT the rand was trading 0.11% weaker at R13.91/$.

The local bourse rose despite a weaker close in major Asian market indices. The Nikkei closed 0.69% weaker while the Shanghai Composite Index dropped 0.45%. The Hang Seng managed to add gains of 0.23%. In Europe, stocks traded mostly firmer while in the USA stocks opened mixed despite better than expected earnings results from banking giants JP Morgan Chase and Goldman Sachs. 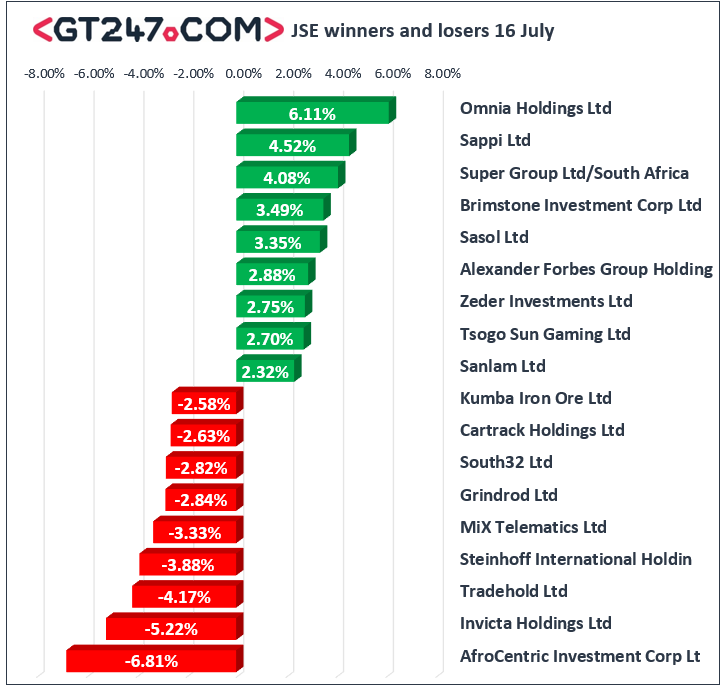 Losses were relatively modest especially for the local bourse’s biggest stocks. Diversified miner South32 [JSE:S32] lost 2.82% as it closed at R29.30, while Kumba Iron Ore [JSE:KIO] fell 2.58% to end the day at R471.16. EOH Holdings [JSE:EOH] lost more ground in today’s session following the release of an update on forensic investigations done into the firm. The share eventually closed 0.77% lower at R20.70. Listed property stocks recorded another subdued session with losses being recorded for Investec Property Fund [JSE:IPF] which lost 2.45% to close at R15.11, as well as Hammerson PLC [JSE:HMN] which fell 2.19% to end the day at R47.70.

Brent crude remained relatively buoyant despite data indicating increased global supplies. The commodity was trading 0.62% firmer at $66.92/barrel just after the JSE close after it had briefly peaked at a session high of $67.08/barrel.