Financials lead gains on the JSE

The local index started the week in stride as it closed firmer on Monday mainly on the back of broad-based gains across all the main sectors.

The JSE advanced despite weaker closes in Asian equities on Monday which failed to get a lift from the resumption of trade talks between the USA and China. The Hang Seng struggled as it fell 1.03% while in mainland China the Shanghai Composite Index dropped a more modest 0.11%. In Japan, the Nikkei lost 0.19%.

Export driven counters in the UK advanced as the pound weakened on the back of news that the new prime minister was stepping up preparations for a no-deal Brexit. In the USA stocks opened marginally softer on the back of declines in some of the index’s biggest tech stocks. 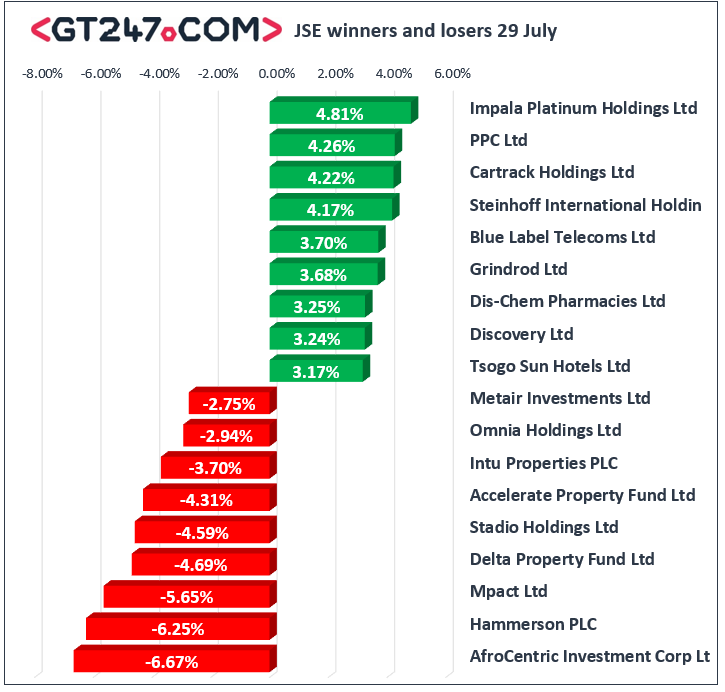 Hammerson PLC [JSE:HMN] came under significant pressure following the release of its half-year results which showed a decline in earnings. The stock lost 6.25% to close at R44.82. Other listed property stocks also struggled which saw stocks such as Accelerate Property Fund [JSE:APF] drop 4.31% to close at R3.11, while Intu Properties [JSE:ITU] weakened by 3.7% to end the day at R13.00. Other significant losses on the day were recorded for Stadio Holdings [JSE:SDO] which fell 4.59% to close at R2.91, as well as Massmart [JSE:MSM] which fell 1.27% to close at R58.90.

The blue-chip JSE Top-40 index closed 0.88% firmer while the broader JSE All-Share index rose 0.64%. All the major indices closed firmer with the biggest gainer being the Financials index which climbed 1.11%. The Industrials and Resources indices gained 0.63% and 0.8%.

Brent crude traded mostly flat on the day and it was recorded trading flat at $63.38/barrel just after the JSE close.