The JSE closed weaker on Wednesday mainly on the back of losses recorded across the industrials and financials indices.

The rand weakened further in today’s session as it fell to a session low of R14.42/$. This resulted in weakness being recorded for most of the financials on the JSE. Resources also came under pressure after JP Morgan cut its outlook for mining giant Anglo American to neutral. This was further compounded by a statement from Goldman Sachs stating that it sees scope for underperformance in the mining sector.

The US dollar remained buoyant throughout today’s session as it peaked at 97.84 index points on the US dollar index. Subsequently the rand was trading 1.1% weaker at R14.40/$ at 17.00 CAT. 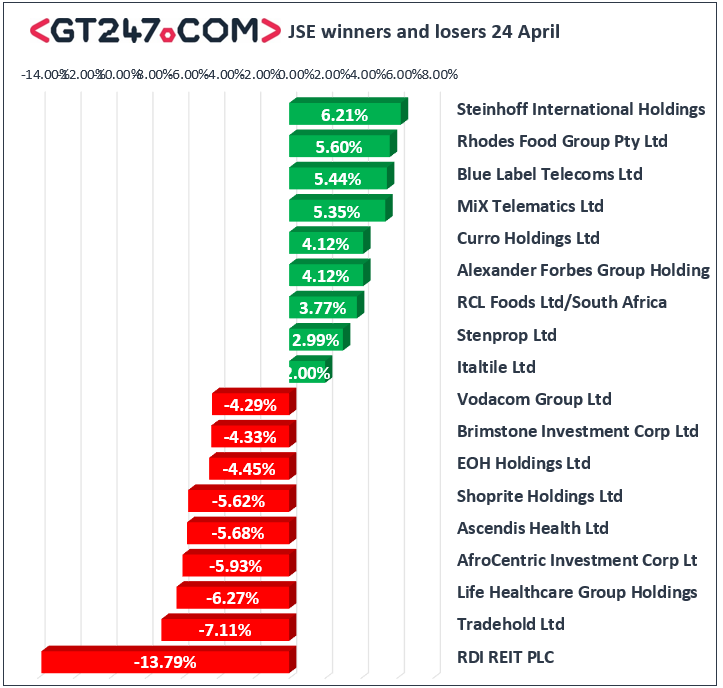 Gains were relatively modest on the day particularly for blue-chip stocks. Richemont [JSE:CFR] eked out gains of 0.74% to end the day at R107.58, while Zeder Investments [JSE:ZED] added 0.93% to close at R4.34. Steinhoff International [JSE:SNH] managed to close as one of the day’s biggest gainers after it advanced 6.21% to close at R1.88. Listed property stocks were also buoyant on the day with gains being recorded for Capital & Counties [JSE:CCO] which gained 1.87% to close at R45.22, Investec Property Fund [JSE:IPF] which added 1.39% to close at R16.00, and Hammerson PLC [JSE:HMN] which closed at R61.56 after gaining 1.67%.

Brent crude retreated marginally from its overnight highs to trade 0.16% weaker at $74.39/barrel just after the JSE close.