Global markets including the JSE rallied on Tuesday mainly on the back of comments from the ECB’s president Mario Draghi, as well as comments from Trump on China ahead of the upcoming G20 summit.

The European Central Bank’s president sparked stocks after commenting that the ECB would ease its policy again if inflation fails to accelerate to its desired level. This was a sharp turnaround from the current bank’s stance which has seen it in what most would call a policy tightening cycle. With markets participants already pricing in a higher probability of a US Fed interest rate cut on Wednesday, this could be the catalyst for another surge in global stocks.

Donald Trump further fueled the optimism after making comments via social media that he would be meeting with the Chinese president at the G20 summit which is scheduled to take place in Japan between the 28th & 29th of June. This is of significant importance given the escalation of trade tensions between China and the USA since May, and more recently the threats made by Trump last week to increase tariffs should the Chinese leader refuse to meet him.

The higher probability of a rate cut being priced in by the market saw the greenback lose ground against a basket of major currencies including emerging market currencies such as the rand. The local currency surged by more than 1.8% against the US dollar as it peaked at a session high of R14.50/$. At 17.00 CAT, the rand was trading 1.9% firmer at R14.50/$. 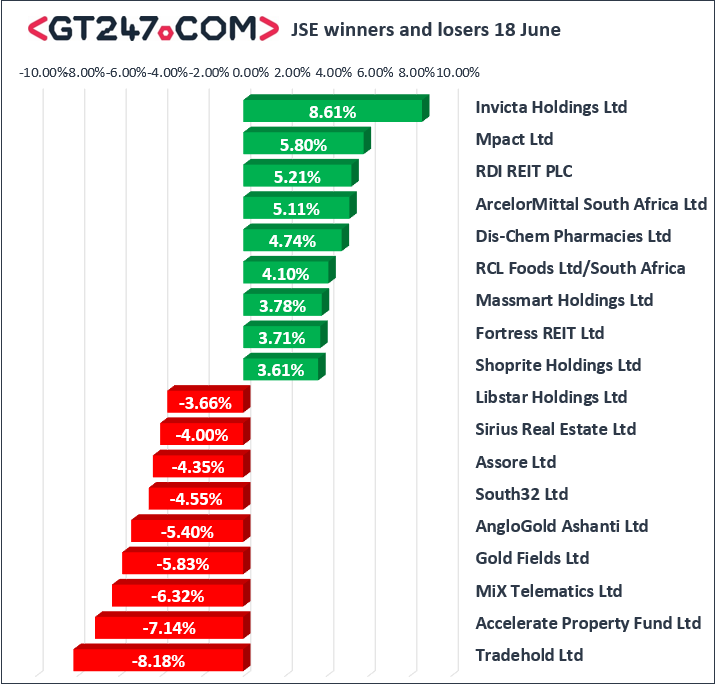 The JSE All-Share index eventually closed 0.78% firmer while the JSE Top-40 index added 0.85%. The Resources index was the only major index which closed softer as it weakened by 0.35%. The Industrials and Financials indices gained 1.07% and 1.47% respectively.

Brent crude surged after news emerged that Saudi Arabia is increasing pressure on other OPEC members to extend supply cuts. The commodity was trading 2.74% firmer at $62.63/barrel just after the JSE close.