US markets sold off on Wednesday as investors continued to fear the effects of inflation on the US economy.  The US 10-year bond yields climbed above the 3% level sending shivers in the market. Asian and Asia pacific markets were lower on the day as investors sought safety in the United States dollar.

The heavy weights on the Dow Industrial index continue to produce strong results as Boeing [NYSE:BA], the US based aeroplane manufacturer produced numbers that beat market estimates. Boeing is at the centre of the Sino-America trade war as China has threatened to cancel orders with Boeing and has indicated it would prefer to buy new aircrafts from European manufacturer Airbus. Boeing’s outlook remains positive, however if President Trump goes ahead with the tariffs on China the aeroplane manufacturer is set to hit some turbulence.

The local market opened the day weaker moving in line with its Asian pacific counterparts. The FNB Consumer confidence recorded its biggest move for the first quarter of the year adding 34 points to the index from the last quarters recording of -8. The increase in consumer confidence may simply be attributed to the change in the political landscape and the perceived growth prospects for South Africa.

In corporate news, gold miner Gold Fields [JSE: GFI] released their production update today, the miner indicated that production had declined by 1% for the quarter ended 31 March 2018. The gold miners CEO Nick Holland sighted the enduring concerns that the business has around their south deep mine. The mine continues to require more capital without any meaningful signs of a turnaround in output and profitability.

The gainers on the day were Afrimat [JSE: AFT], the stock was up 6% today to trade at 3074c, strong gains were also recorded in Clientele [JSE: CLI], Sun International [JSE: SUI], and British American Tobacco [JSE: BTI] up 3.59%,3.51% and 3.32% respectively.  The bourse was mainly covered in red today as some rand hedges provided a glimmer of hope for the market. 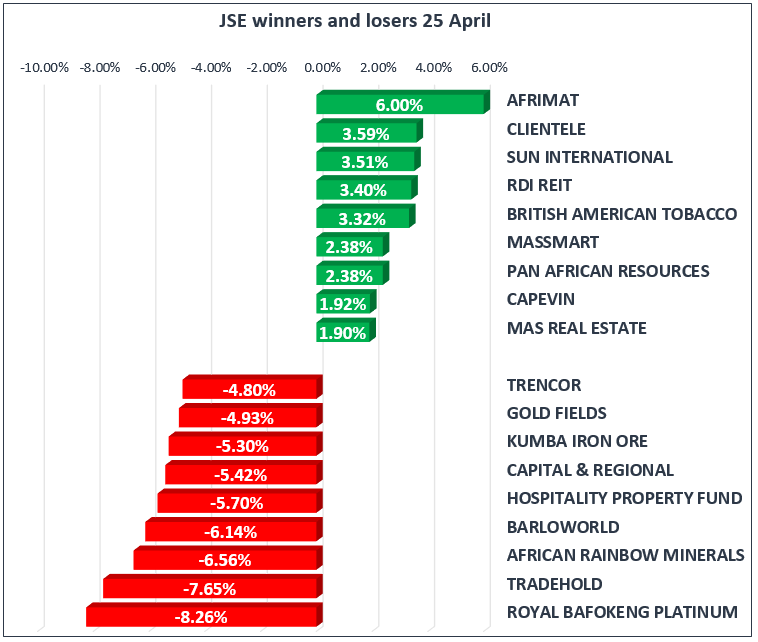 The major losers on the day were Royal Bafokeng Platinum [JSE: RBP], Tradehold [JSE: TDH],  African rainbow minerals [JSE: ARM],  and Barloworld [JSE: BAW]. RBP slid 8.26% to trade at 2309c as the platinum giant finds the going tough as commodity prices continue to fluctuate. ARM and BAW shed, 6.56% and 6.14% on the day as TDH continues to find firm footing as it plunged 7.65%

The Rand was softer again today and was trading at R12.48/ $ at 17:00 CAT a move of about 14c from yesterday level at the same time. South African 10-year bond (R186) yields continued their move higher today and were bid at 8.30% up from 8.22% yesterday.  US 10year treasury yields continued to trade above the 3% mark today as the benchmark treasuries remained firmly bid by the market as the market sighted higher inflation concerns.

Bullion was softer on the day as commodities continued to feel the pressure of the firmer dollar.  At the time of writing Gold was trading at $1320/Oz, but it appears as if the market is favouring Bitcoin[BTCUSD] as a safe haven asset.  The crypto currency has recovered from its recent lows of $6800 and is now trading at $8925/coin at the time of writing.

Brent Crude was softer on the day as it joined a basket of commodities that were crushed as the dollar advanced. A barrel of Brent crude was changing hands at 72.81/ barrel at 17:00 CAT off its intraday highs of $73.20/ barrel.