The JSE eventually closed firmer on Tuesday following a mixed session in which the local bourse traded mostly softer.

The local bourse, along with US equity futures swung into positive territory following rising speculation that the USA would delay implementing new tariffs at the 15 December deadline this week. Stocks in the Eurozone did not advance on the back of this news and remained softer. In earlier trading in Asia, the Nikkei shed 0.09% while the Hang Seng closed 0.22% softer. The Shanghai Composite Index barely closed 0.13% firmer.

The risks associated with load shedding by Eskom, as well as reductions in output reported by some miners and manufacturers have increased the risk profile of South Africa over the past week. In today’s session the rand buckled as it fell to a session low of R14.84/$ before it was recorded trading 1.24% weaker at R14.84/$ at 17.00 CAT. 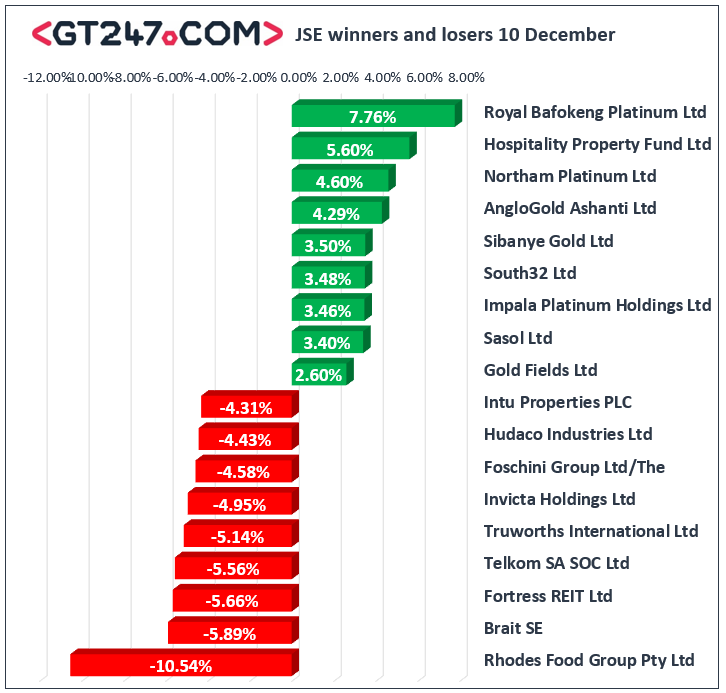 The JSE All-Share index only closed 0.01% firmer while the blue-chip JSE Top-40 index managed to close 0.13% higher. The Resources index was the only major index to record gains as it surged 1.8%. The Industrials and Financials indices lost 0.65% and 0.69% respectively.

Brent crude was steady in today’s session even as the delay in trade tariffs was announced. The commodity was trading 0.05% firmer at $64.28/barrel just after the JSE close.