Equity markets opened the week deep in the red on Tuesday after the Heritage Day public holiday on Monday.

Gloves are off as the trade war between China and America gains more vigour.  The new set of tariffs on American goods took effect on Monday as Beijing retaliated to Americas second tranche of tariffs. The adversaries are hell-bent in creating an “iron curtain” between the two economic giants a state of affairs that cannot be sustainable in the 21stcentury.  Asian markets were mixed on Tuesday as the Hang Seng and the Shanghai Composite Nikkei retreated 1.62% and 0.9% respectively. The Japanese Nikkei was the only exchange to chalk up any gains in Asia closing the day 0.29% in the black.

The Johannesburg stock exchange was under pressure today as investors continued to show signs of nervousness on emerging market assets. The local market is very unforgiving as Choppies Enterprises sustained a 74.55% knock on the day to trade at 42c per share. The Gabarone based retailed issued a Trading statement to the market after the market closed on Friday, stating that they were unable to release their financial reports in the stipulated time as per JSE requirements.  The retailer stated in their statement that they expect earnings to decline by over 20%. Notable gainers were recorded in EOH [JSE: EOH], which was up 7.42%, the tech giant is expected to release their earnings numbers next week. Some of the local miners were firmer on the day with Assore[JSE: ASR], Gold Fields [JSE: GFI], Arcelormittal [JSE: ACL],   and Kumba Iron ore [JSE: KIO],  recording gains of 5.9%, 5.21%,4.75% and 3.995% respectively.    The integrated energy and chemical giant Sasol was firmer on the day closing the day 3.85% in the black as the Brent oil price pierced through $80/barrel in early morning trade. 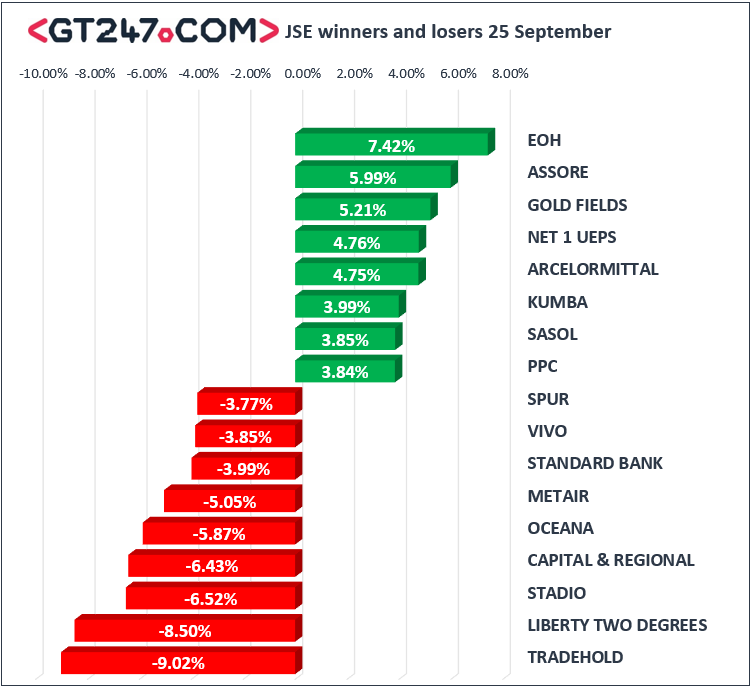 The local unit was flat against the greenback, to trade at R14.38/ $.  The “New deal” that President Ramaphosa tabled on Friday appears to have wet investors’ appetites.  Implementation of the “New deal” is paramount as the market doubts that the deal will make any significant inroads to grow and sustain the economy.