The JSE advanced on Friday mainly on the back of broad-based positive sentiment which saw most equity markets trading firmer.

The buoyancy in global stocks was triggered by China’s renewed commitment to increase stimulus in its economy. This move is mainly due to the slowdown in China’s economic activity which was highlighted by industrial production data which was released on Thursday. Chinese regulators intend to further cut value-added taxes and incentivize Chinese credit providers to extend loans to businesses. The USA released weaker industrial production numbers on Friday, but this did not dampen the mood for the global stocks as they remained upbeat. 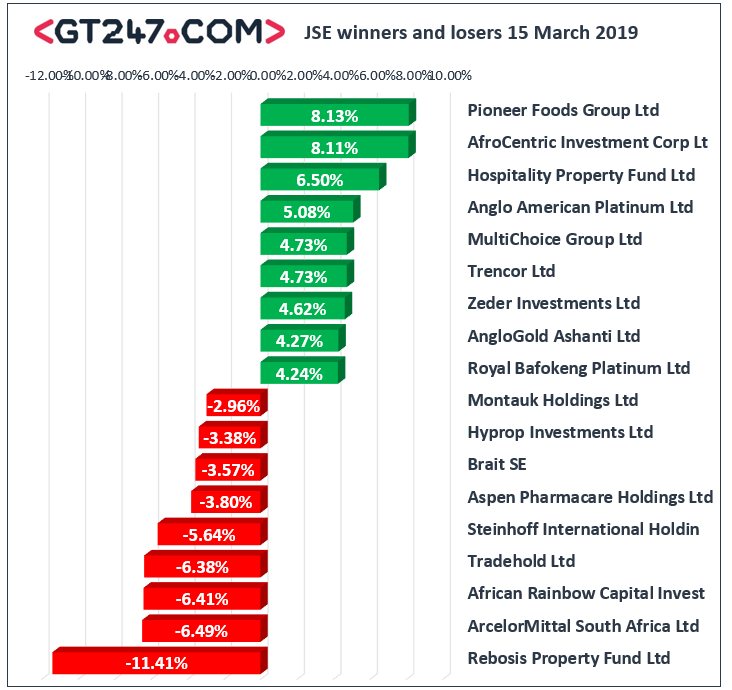 The JSE All-Share index held on to its gains to close 0.45% firmer, while the JSE Top-40 index added 0.4%. The Industrials and Financials indices managed to gain 0.47% and 1.68% respectively, but the Resources index was softer as it eventually closed 0.59% weaker.

The rand advanced on the day mainly due to the weakness recorded in the US dollar as US treasuries rose. The local currency was 0.87% firmer to trade at R14.41/$ at 17.00 CAT.

Despite trading mostly flat earlier, brent crude came under pressure in the afternoon session as it fell to a session low of $66.13/barrel. The commodity was trading 1% weaker at $66.56/barrel just after the JSE close.