The JSE advanced on Monday on the back of broad-based gains across most equity markets which were inspired by positive Chinese economic data.

China released its Caixin Manufacturing PMI data on Monday morning which came in better than expected at a reading of 50.8, which was better than the forecasted 50.1. This was the catalyst that investors needed to seek riskier assets as stocks from Asia to Europe advanced on the day. In Japan, the Nikkei closed 1.43% higher, while in mainland China the Shanghai Composite Index rallied 2.62% and the Hang Seng closed 1.76%.

The risk-on momentum did not bode well for the US dollar which retreated on the day against a basket of major currencies. This, as well as Moody’s postponement of South Africa’s sovereign rating saw the rand surge against the greenback to a session high of R14.15/$. At 17.00 CAT, the rand was up 2.37% to trade at R14.15/$. The rand even shrugged off the weaker number recorded for the ABSA Manufacturing PMI in March, which came in weaker at 45.0 compared to a prior recording of 46.2. 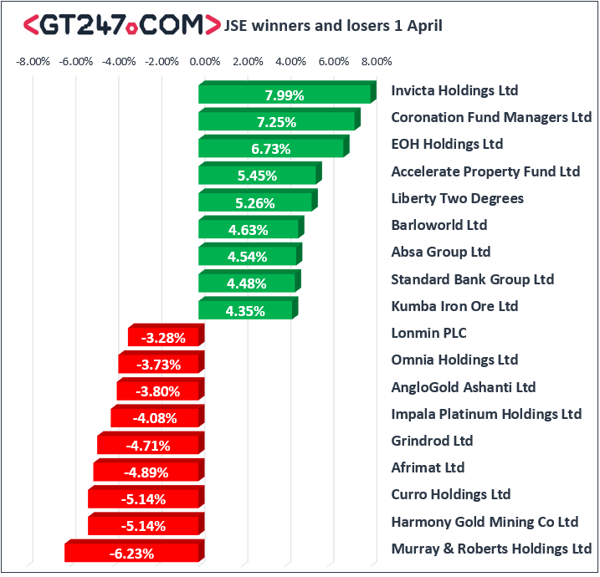 The JSE Top-40 index eventually closed 1.37% firmer while the JSE All-Share index gained 1.27%. All the major indices managed to record gains on the day. Industrials gained 1.03%, Resources added 0.66%, while the Financials index rallied 2.73%.

Brent crude extended its run as investors remain bullish due to better than expected Chinese economic data. Brent crude was trading 1.24% firmer at $68.42/barrel just after the JSE close.