The local bourse rallied on Wednesday as global stocks rose on the back of positive Chinese economic data and the resumption of trade talks between China and the USA.

China released its Caixin Services PMI numbers for the month of March which came in better than forecasted at 56.8, compared to an estimated level of 55.0 and higher than the prior recording of 54.5. The Shanghai Composite Index advanced 1.28% while the Hang Seng managed to gain 1.22%. The Japanese Nikkei rose 0.97%.

There was some disappointment in terms of local economic data following the release of the Standard Bank SA PMI data which showed a decline to 48.8 from a prior recording of 50.2. The rand was deterred by this data as it traded mostly firmer but primarily on the back of a weaker US dollar. The rand managed to peak at a session high of R14.10/$ before it retraced to 0.37% firmer at R14.15/$ at 17.00 CAT. 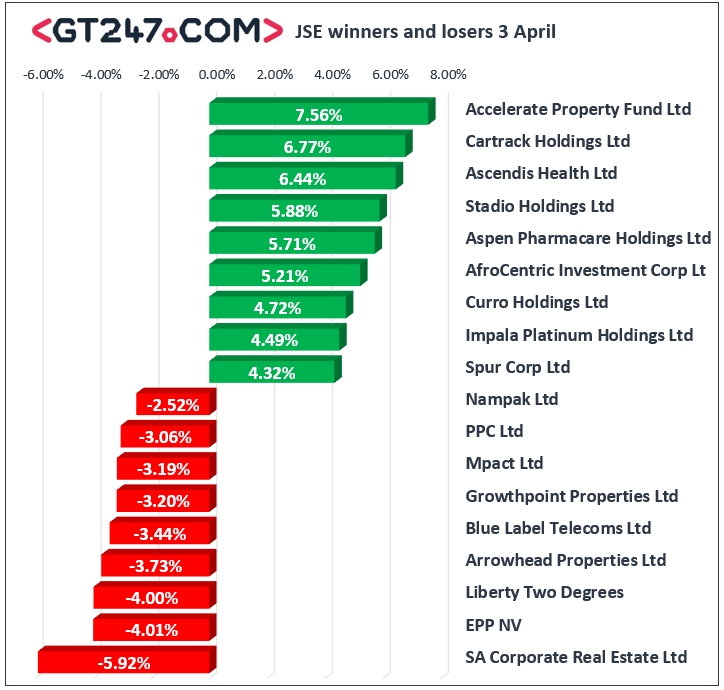 The JSE All-Share index closed 1.34% higher while the JSE Top-40 index gained 1.35%. All the major indices advanced on the day with the biggest gainer being the Resources index which advanced 2.06%. The Industrials and Financials indices gained 0.98% and 1.37% respectively.

Brent crude paused towards the JSE close after having traded mostly firmer for most of today’s session. It was trading 0.09% weaker at $69.31/barrel just after the JSE close.