The JSE rose along with European and US equities after Chinese officials indicated that China was not going to retaliate immediately to the recent US tariff increase.

This helped spur stocks as investors sort after riskier assets on the back of this reassurance. However, skepticism remains rife given how easily circumstances can change with a single comment from either China or the USA. Positive GDP growth out of the USA also aided in reassuring market participants that the US economy was still strong despite the risks associated with trade war.

On the currency market, the US dollar held firm against a basket of major currencies. Emerging market currencies also held their own as they tracked mostly firmer on the day. The rand managed to strengthen to a session high of R15.25/$ before it retraced to be recorded trading 0.45% firmer at R15.32/$ at 17.00 CAT.

There was positive news in terms of local economic data as Statistics SA released South Africa’s producer inflation data for the month of July. PPI YoY slowed to 4.9% from a prior recording of 5.8%, which also beat the forecasted level of 5.2%. PPI MoM was recorded at -0.2% compared to a prior recording of 0.4%.

On the local bourse a couple of retailers released their earnings results which did not come as a surprise given indications from recent trading statements. The strength in the retailers in today’s session can mainly be attributed to a firmer rand as well as the market having priced-in the bulk of today’s results. Massmart [JSE:MSM] which released its half-year results closed 7.86% firmer at R42.69, Woolworths [JSE:WHL] which released its full-year results rose 4.55% to close at R54.42, while Mr Price [JSE:MRP] also advanced as it gained 2.41% to close at R166.60.

Sibanye Stillwater [JSE:SGL] released its half-year results which highlighted that they are expecting an improved outlook for the remaining half of the year. The stock closed 2.81% firmer at R21.59. Northam Platinum [JSE:NHM] closed amongst the day’s biggest gainers after rallying 9.41% to close at R76.53. Other significant gainers on the day included Glencore [JSE:GLN] which rose 2.94% to close at R43.36, Mediclinic [JSE:MEI] which gained 2.75% to close at R62.35, and Bid Corporation [JSE:BID] which closed at R319.20 after adding 2.64%. 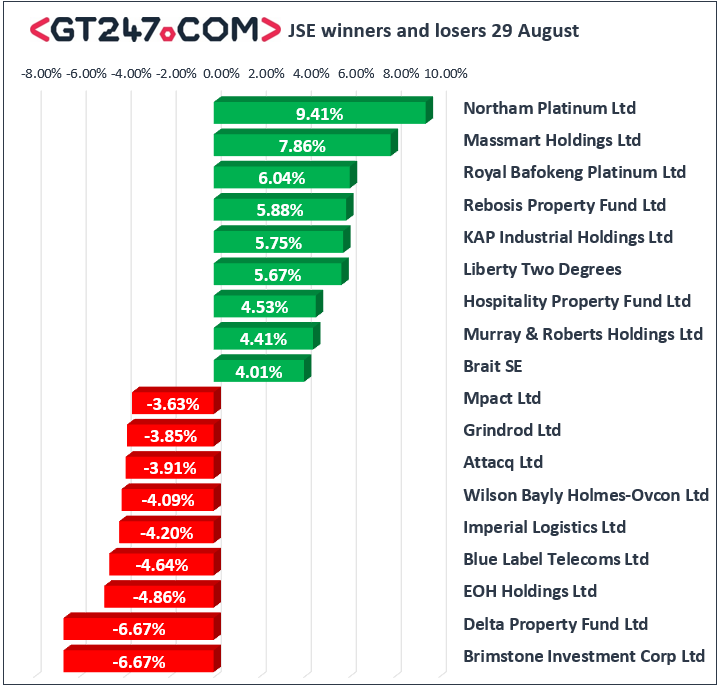 The JSE Top-40 index eventually closed 0.27% firmer while the JSE All-Share index only closed 0.04% firmer. The Financials index closed 0.6% weaker while the Resources and Industrials indices managed to gain 0.32% and 0.59% respectively.

Brent crude was trading relatively firmer on the day before it was recorded trading only 0.03% firmer at $59.95/barrel just after the JSE close.