Global stocks plummeted on Monday after brent crude recorded its worst fall since the Gulf war in 1991.

The fall in brent crude was triggered by news that the OPEC and Russia had failed to agree to production cuts on Friday last week. In retaliation, Saudi Arabia cut its official prices sending oil prices which were already reeling from the impacts of the coronavirus into a freefall. An increasing number of coronavirus infections outside of China also sparked deeper fears in investors as they sort of safe havens such as government bonds. Trading halts were triggered on the S&P500 and Dow Jones equity futures after they reached their down limits.

The flight to government bonds was evident in US Treasury yields which slipped to fresh all-time lows, while stocks continued to fall across all the major indices. The US dollar is increasingly becoming a safe haven as evidenced by the sell-off of emerging market currencies in favour of the greenback. The local currency tumbled as low as R16.97/$ before it rebounded strongly to be recorded trading 1.84% weaker at R15.94/$ at 17.00 CAT. 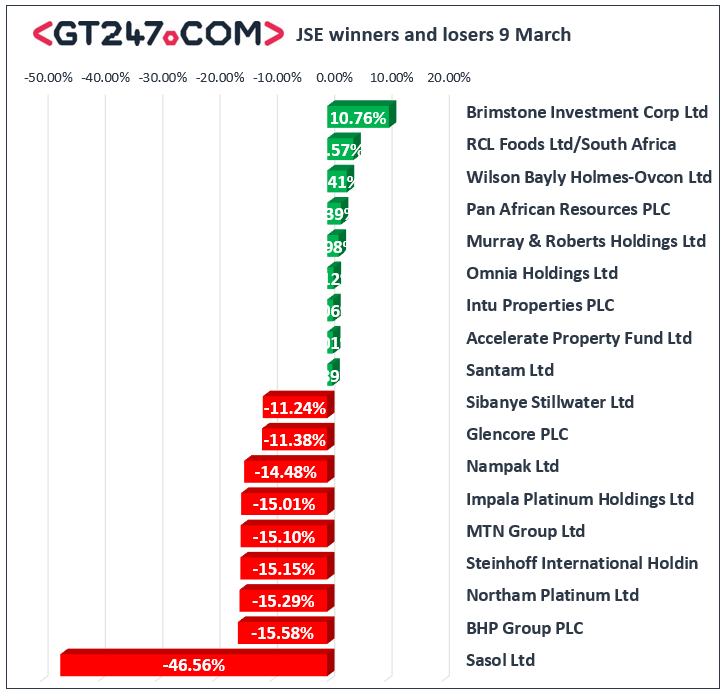 The JSE Top-40 index eventually closed 6.57% lower while the broader JSE All-Share index lost 6.23%. The Resources index was the biggest casualty of the day as it lost 12.01%, while the Industrials and Financials indices lost 3.9% and 4.37% respectively.