The votes are in and Boris Johnson #BOJO has taken it to become the new conservative party leader which will pave the way for him to become the next U.K. Prime Minister.

Close to 160 000 conservative members were eligible to take part in the vote with a turnout of 87.4%, Boris Johnson took the "crown" with 66.4% of the votes over Foreign Secretary Jeremy Hunt.

Johnson, a former mayor of London, will take over the illustrious role of Prime Minister later today. Theresa May congratulated Boris Johnson and promised him her full support from the backbenches.

In his victory speech, Mr. Johnson promised he would "deliver Brexit, unite the country and defeat Jeremy Corbyn" the opposition Labour party leader.

No doubtingly Johnson will have his work cut out for him to deliver Brexit with less than 100 days to go. He is the first avowed Brexit supporter to lead the charge since the U.K. voted to leave the European Union.

Comments started to come in as the news broke that Boris Johnson had been elected and 30 min after even President Donald Trump had this to say:

Here are some more international reactions to Boris Johnson's election as the new conservative leader: 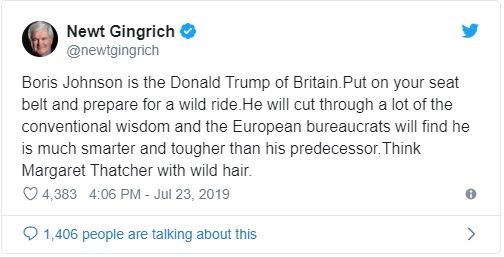 And even Russia's channel 1 had a go, as not everyone was delighted about the victory: 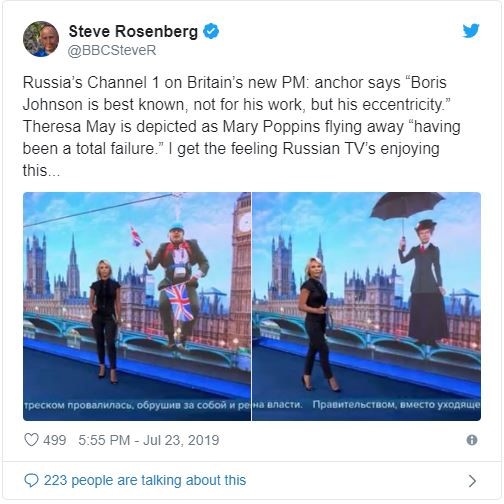 Theresa May will deliver her last speech outside No 10 Downing Street before giving her resignation to Queen Elizabeth personally. Johnson will have an audience with the Queen at Buckingham Palace after that he will be invited to form a government.

He will then make a speech at No.10 where he will enter the building to become the new Prime Minister of Great Britain. This is where he will appoint and announce his most senior cabinet and take calls from other world leaders.

Thursday will see Johnson enter the hot seat as he is expected to make a statement to Parliament about his Brexit strategy and take questions from other M.P.s which will be heated without a doubt.

There might be more downside for the Pound in the coming weeks if no deal is reached to leave the E.U. as the Pound is currently trading at its lowest point in two years due to fears of a "no-deal" Brexit.

Taking a closer look at the Cable rate, we can see the price continue to move lower and is currently finding support at the 1.2437 level. A breakdown of this level might see the price target even lower levels at 1.2316. 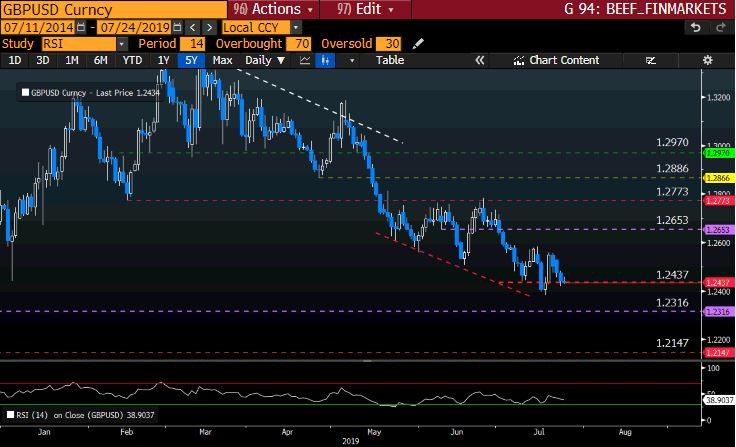