The JSE fell on Friday led by declines in certain blue-chip stocks which fell on the back weaker earnings and negative sentiment.

There was some risk-aversion in today’s session as stocks in Asia and Europe recorded losses, while US equity futures pointed lower before the spot market opened. With the USA and China having reached a deal to roll back the tariffs in phases, investor fears seem to have eased during this trading week. Chinese trade balance data came in better than expected which gave market participants hope that the impact of the trade war remained minimal.

On the local bourse, index heavyweight Richemont [JSE:CFR] dragged the all-share index lower following the release of its half-year results which showed declines in earnings and cash flow from operations. The stock eventually close 5.73% lower at R110.77. Gold Fields [JSE:GFI] released a positive quarterly operational update, however broader risk-off sentiment saw the stock fall 6.31% to close at R76.45. Other gold miners also struggled on the day with losses being recorded for Harmony Gold [JSE:HAR] which lost 3.96% to close at R45.89, and DRD Gold [JSE:DRD] which tumbled 7.34% to close at R6.44. Reunert [JSE:RLO] came under pressure as it highlighted tough trading conditions in its full-year trading statement. The stock lost 5.99% to close at R69.58. Retailers came under pressure on the back of the softer rand which saw declines being recorded for The Foschini Group [JSE:TFG] which lost 3.82% to close at R160.35, and Truworths [JSE:TRU] which closed at R50.56 after dropping 3.73%. 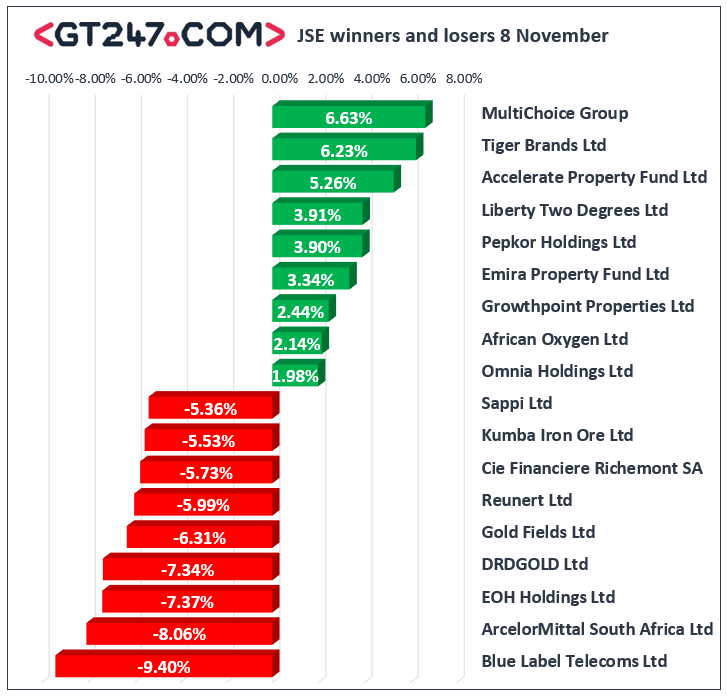 Multichoice Group [JSE:MCG] recorded bigger gains in today’s session following the release of a positive trading update on Thursday towards the close. The share surged 6.63% to close at R133.50. Listed property stocks tracked mostly higher on the day as gains were recorded for Intu Properties [JSE:ITU] which inched up 0.31% to close at R6.45, and Redefine Properties [JSE:RDF] which added 0.74% to close at R8.15 as Moody’s Investor Services affirmed its ratings of the company. Tiger Brands [JSE:TBS] was bolstered by the release of an update on the portfolio optimization initiatives that it is currently embarking on. The stock closed 6.23% higher at R234.50. Other significant gains were recorded for Imperial Logistics [JSE:IPL] which added 1.86% to close at R57.41, and Pepkor Holdings [JSE:PPH] gained 3.9% to close at R17.30.

The blue-chip JSE Top-40 index eventually closed 1.61% lower while the JSE All-Share index lost 1.54%. All the major indices retreated on the day led by losses on the Industrials index which lost 2%. The Financials and Resources indices fell 0.68% and 1.59% respectively.

Brent crude slipped in today’s session as it was recorded trading 2.28% weaker at $60.81/barrel just after the JSE close.