As if last week’s data releases by the Bank of England (BoE) weren’t enough, the roller coaster ride is set to continue as the latest Gross Domestic Product (GDP) figures were released on Monday.

The big picture – The MPC’s fears are seen to be realised as the UK Statistics Authority released some important economic data on Monday like the Gross Domestic Product (GDP) numbers. The Office for National Statistics released its latest round of economic data which saw major declines in the British economy. The U.K’s GDP grew by a measly 0.2% in fourth quarter of  2018 which has not been seen in the last 6 years. The Quarter on Quarter growth is on the decline as one can see from the graph below.

Some of the other notable data released were the

Below a longer-term measure of growth shows production and manufacturing contracting Growth, three-months on three-months a year earlier, UK, November to January 2018 until October to December 2018 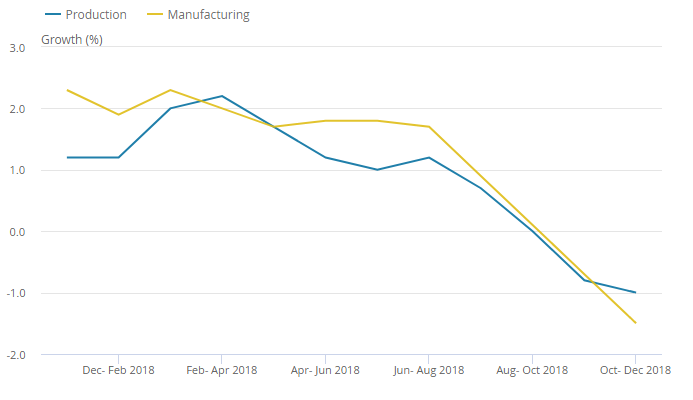 After the GDP data was released Sterling erased all its gains from the Monday morning trading session and was under pressure for the rest of the day. The MPC will take the data into consideration as a weaker currency was a concern moving forward into a Brexit environment.